Is Honey Keto Friendly? Try These Zero Carb Sweeteners Instead

If you’re familiar with the keto diet, the question “is honey keto?” isn’t hard to answer. The answer is no.

From a calorie and carbohydrate perspective, honey isn’t much different from table sugar. And table sugar is keto kryptonite.

High sugar intakes not only inhibit the fat-burning state called ketosis, but drive a slew of health problems too. Fortunately, you can avoid these dangers by opting for keto-friendly sweeteners instead.

We’ll discuss these low-carb options in a moment. First, let’s talk about honey, sugar, and the keto diet.

Honey is often marketed as a healthy sugar substitute. Because of this, many people assume they can avoid the dangers of sugar by swapping in honey.

There is some truth to this. For instance, raw honey contains bee pollen, royal jelly, and propolis—and preliminary research suggests these compounds may alleviate allergies and improve immune function.

But beneficial compounds aside, honey is mostly a combination of the simple sugars glucose and fructose. In other words, honey is similar to refined sugars like sucrose and high fructose corn syrup.

There are several paths to ketosis, but the most accessible one is through carb restriction. That’s where the keto diet comes in.

When you eat a keto diet, you restrict carbohydrates to under 10% of daily calories. Keeping carbs low keeps blood sugar low, which keeps the hormone insulin low, which signals your liver to burn fat and produce ketones. That’s the concise version of how keto works.

Honey is 100% carbohydrate, so it isn’t part of the keto diet plan. For reference, one tablespoon of honey contains 17.2 grams of sugar.

If you want to kick yourself out of ketosis, honey is a good way to do that. But what about other “healthy” sugar alternatives?

Like honey, maple syrup is full of antioxidants. In fact, it may have more antioxidants than honey.

Maple syrup is also full of oligosaccharides. In rats, these prebiotic sugar molecules have been shown to improve blood glucose regulation.

So should you start pouring maple syrup on everything? Not if you’re trying to limit your sugar intake. Like refined sugar, maple syrup is just glucose and fructose.

Is maple syrup keto? Definitely not.

Also no. Agave is about 85% percent fructose, with the rest being glucose. It’s just sugar by another name.

The high fructose content is especially undesirable. Why? Because humans are built to store fructose as fat.

Millenia ago, the hominids (early primates or humans) that most efficiently turned fructose to fat were the hominids that survived. We all got these genes.

Coconut sugar is a form of carbohydrate made from coconut sap. It contains antioxidants, various minerals, and a type of fiber called inulin that may feed beneficial gut bacteria.

Coconut sugar, however, is calorically equivalent to table sugar. In other words, it’s sugar with a few extra nutrients.

But while it may be unrefined, molasses is still sugar. After all, you make molasses by boiling down sugar cane.

Heard of yacon syrup? It’s a sweet goo made from the Yacon plant, a species of daisy native to South America.

Yacon is sweetened by both sugar and non-caloric carbohydrates called fructooligosaccharides (FOS). Consuming FOS may help with appetite control, but gas is a common side effect.

Yacon has about one-third the calories of sugar, so it’s more keto-friendly than honey, maple syrup, molasses, or agave. But when you get down to it, it still has too many carbs to be keto.

For a sweetener to be keto-friendly, it should contain zero (or close to zero) calories from carbohydrates. That way, you can use as much as you like without derailing your health goals.

A keto-approved sweetener should also:

So they’re certainly keto-friendly, and that’s before you factor in potential health benefits. Consider that:

● Both stevia and monk fruit contain powerful antioxidants and have a long history of traditional medicinal use.
● Erythritol may improve blood vessel function and oral health.

● Consuming allulose with carbs has been shown to improve the glycemic response and increase fat burning.

How can you incorporate these keto sweeteners into your diet? Easy. Just use them anywhere you’d use sugar.

To Honey or Not to Honey?

Reasonable portions of honey aren’t necessarily bad for you. It may even have health benefits. However, you would have to consume a lot of honey to even get these benefits. And that’s a lot of sugar.

But if you’re following a low-carb or keto diet, you’ll want to steer clear. Honey is made of sugar, and sugar is the arch-nemesis of ketosis.

Satisfy your sweet tooth by indulging in keto-friendly sweeteners instead. They serve the same purpose as honey with none of the downsides.

It’s all upside. We like it when that happens.

Keto Recipes Made with Splenda Sweeteners 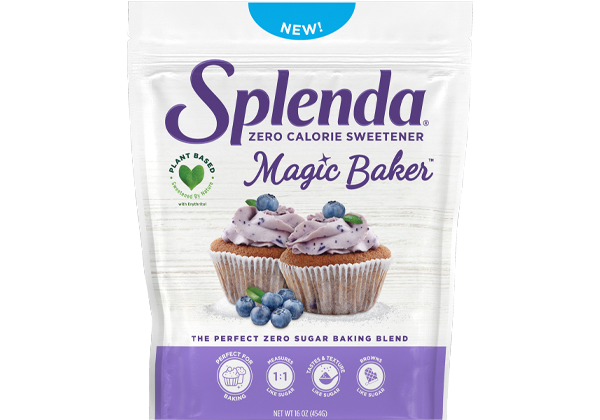