Everything You Need To Know About Stevia

If you’re cutting back on sugar but still craving sweets, you’ll want to get acquainted with stevia. This plant-based sweetener has zero calories, doesn’t raise blood sugar levels, and is perfectly suited to low-carb or keto diets.

Because of this, health-conscious folks everywhere have chosen stevia as their preferred sugar substitute. Rather than feel guilty, you’ll actually feel good about eating stevia-sweetened foods.

And why wouldn’t you? Stevia is a safe and delicious sweetener with an impressive list of potential health benefits. We’ll cover those health benefits in a second, along with fun tips and stevia recipes. First, let’s define what stevia is.

Stevia is a zero-calorie sweetener derived from the leaves of the stevia rebaudiana plant. The extract is much sweeter than sugar, but stevia sweeteners (like Splenda Stevia Granulated Sweetener) are formulated to match sugar’s exact sweetness (bakes and measures 1-to-1 just like sugar). This makes recipe substitutions a snap.

Stevia leaves were first discovered by natives of South America about 200 years ago. These cultures not only used stevia to satisfy their collective sweet tooth, but also as a remedy for diabetes.

Stevia’s sweetness and health benefits stem from compounds called steviol glycosides within the stevia leaf. The most researched glycosides include:

The glycosides are all sweet, but each have different properties. For instance, rebaudioside D (used in Splenda Stevia products) doesn’t have a bitter aftertaste—a common complaint with sweeteners made with rebaudioside A.

Why choose stevia over sugar? There are several reasons.

First, you might want to reduce your consumption of empty calories. The average American consumes nearly 17 teaspoons of added sugar per day, mostly from sugar-sweetened beverages.

That’s over 250 calories that don’t fill you up. Reducing them can help with weight loss efforts.

You might also be concerned about your long-term health. High-sugar intakes have been linked to increased risk of heart disease, cognitive decline, type 2 diabetes, cavities, and many other health conditions.

Finally, if you’re on a low-carb or keto diet, added sugar is a big no-no. Why? Because consuming refined sugar raises blood sugar and insulin levels, which in turn shuts down fat burning and ketone production.

Stevia, however, has none of these downsides. Rather, it appears to have benefits.

One could argue that stevia is a health food. See if you agree after reading this section.

For centuries, the natives of Paraguay and Bolivia have used stevia leaves to treat the metabolic disorder called type 2 diabetes. Modern researchers still aren’t sure if stevia helps with diabetes, but stevia has been shown (in a 2020 randomized controlled trial) to not raise blood sugar in people with type 2 diabetes. So at the very least, it doesn’t hurt.

And check out this 2010 study. First, 32 non-diabetic people were given a snack made with either sucrose (table sugar) or stevia, then they were turned loose on a buffet. The subsequent test results were interesting. Compared to the sugar group, the stevia group not only had lower blood sugar after the meal, but they also ate fewer calories overall.

Stevia is rich in plant-based antioxidants called phenols. These phenols may help reduce the oxidative stress that damages cells and organs as we age.

In mice, a compound from stevia leaves called stevioside was shown to reduce markers of inflammation like TNFα, interleukin 6 and interleukin 10. Promising stuff.

#4: May help with weight loss

If you want to lose weight, it helps not to over-do the calories. When you replace empty sugar calories with a noncaloric sweetener like stevia, you give yourself a leg up in this area.

In one study, Indian school children given a stevia mouthwash had less oral plaque and gingivitis. Sugar, by contrast, is undeniably linked to cavity formation.

Stevia Safety and Side Effects

Stevia is generally recognized as safe (GRAS) by the FDA. This means that a group of experts has determined stevia to be safe for humans at normal doses.

Other regulatory bodies have set the acceptable daily intake (ADI) of stevia at 4 mg per kg bodyweight per day. (The ADI, by the way, is the daily dose of a substance unlikely to cause harm over a lifetime.) To hit stevia’s ADI, a 150 pound woman would need to consume 40 tabletop packets of stevia every day for the rest of her life. Most people only use a few packets per day, at most.

What about side effects? According to clinical trials, stevia appears to have none.

The bottom line is that stevia looks to be extremely safe and well-tolerated in humans.

How To Use Stevia

Stevia is a healthy sugar substitute. Use it anywhere you’d use sugar. Here are some ideas.

Stevia for Baking and Cooking

When you use stevia, you no longer have to feel guilty about making (and eating) chocolate chip cookies, banana bread, muffins, shortcakes, and whatever else Grandma handed down in the recipe book.

Here are some stevia-sweetened recipes to get you started:

In case you were wondering, Splenda Stevia dissolves perfectly into liquids. (It even comes in liquid form for instant sweetness). Use it to make:

Craving treats on the keto diet? Stevia is the keto-friendly sweetener for you. Simply add Splenda Stevia to your coffee, tea, or favorite recipes for all the sweetness of sugar with none of the consequences.

Should You Use Stevia?

If you’re craving a healthy sugar substitute, stevia fits the bill. It has zero calories, plenty of sweetness, and doesn’t kick you out of ketosis.

Give stevia a try and see what you think. It might be the best decision you make all month.

Recipes Made with Splenda Stevia 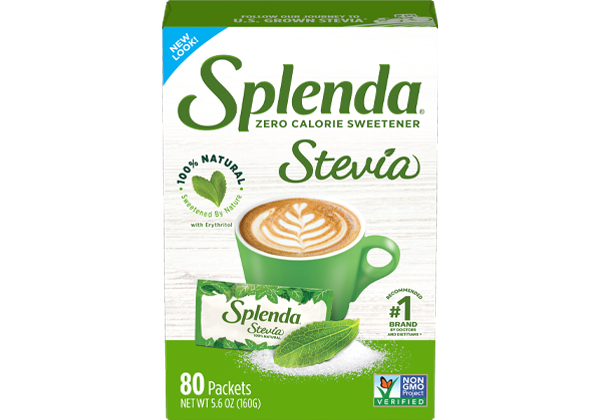 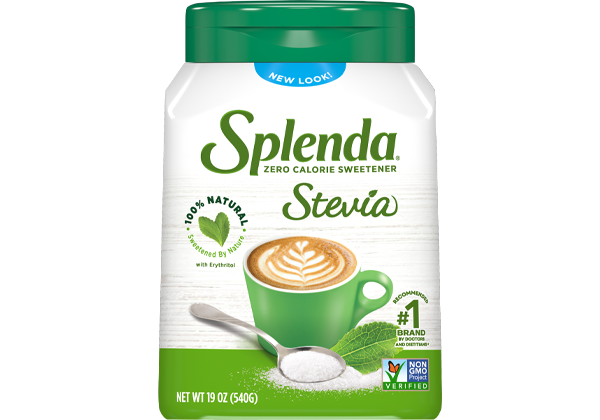